DevSecOps- What is it, and how is it different from DevOps? 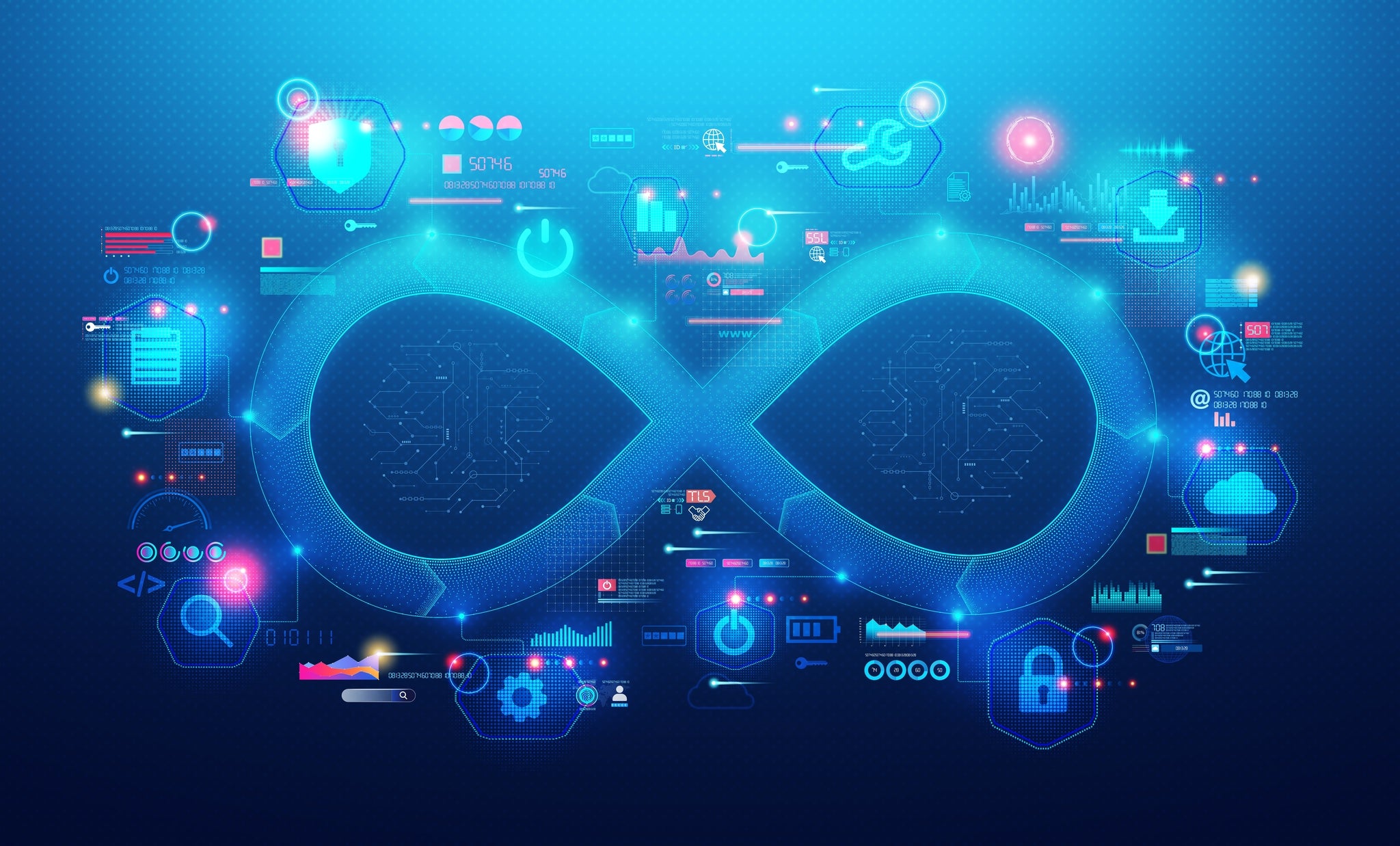 DevSecOps, which stands for "development, security, and operations," is a methodology for creating software that takes security measures into account from the beginning of the software creation process. DevSecOps integrates security into the CI/CD workflow to help development teams tackle some of today's most critical security concerns at DevOps speed.

Traditionally, security measures and procedures have been added to a project near the end of its development cycle. However, DevSecOps is now becoming a go-to technique for guaranteeing the security of apps in the modern development environment.

This results from the advent of more sophisticated cybersecurity assaults and the transition by development teams to shorter, more consistent iterations of applications.

In this article, we will explore the following:

DevOps is a method of software development in which the development and operations teams work closely together from the beginning to the end of the project. Each DevOps team works toward the same fate and uses the same methods and instruments to measure success. DevOps aims to reduce the time it takes to create and release software without sacrificing quality, stability, or predictability.

Engineers in DevOps seek to improve the speed and reliability with which applications are updated while reducing the impact on users. To meet their deadlines, DevOps teams often put security concerns second. Placing security at the end of the DevOps pipeline can lead to a buildup of vulnerability that puts a company's resources, end-user data, and software at risk.

DevSecOps is a new approach to DevOps that puts security first. It arose as a result of the realization by DevOps teams that the absence of security processes in the DevOps pipeline rendered the former method ineffective. DevSecOps is an approach to software development and operations that prioritizes security from the outset rather than as an afterthought.

In DevSecOps, the application security processes are integrated into the development pipeline at the outset. DevSecOps engineers may ensure programs are safe before releasing them to the public and exposing them to potential threats using a security-first strategy.

How is DevSecOps similar to DevOps?

Here are a few examples of how DevOps and DevSecOps are similar to one another:

When put together, they are individual parts of an application that form a functioning whole. Developers and other technology team members can break down complicated code into smaller chunks that are easier to handle if a microservice architecture is implemented.

DevOps and DevSecOps teams must continuously record and monitor application data to effectively drive improvements and address issues. Performance can be enhanced, the attack surface can be reduced, and the overall security posture can be bolstered by keeping an eye on live data.

Infrastructure as Code, also known as IaC, is a movement that enables you to design and carry out the implementation of infrastructure requirements using code. Because of this new method, IT professionals no longer need to manually configure servers, install software packages, or administer operating systems remotely, all of which would require a significant amount of manual effort and would take several hours to complete.

Transitioning From DevOps to DevSecOps

Integrate Security Into the Dev Cycle

Developers often skip security checks because of their time-consuming and laborious nature. The DevOps concept was created to speed up getting code into production while decreasing the time spent on software development administration. Taking the same strategy while moving from DevOps to DevSecOps can improve the effectiveness of security measures.

To aid developers, we intend to streamline the security test process. The process should be as automated as possible, and the outcomes should be straightforward. Developers currently use an issue-tracking system to keep track of software flaws; therefore, tools should send bugs directly to this system.

Applying technologies made for DevSecOps processes will help you automate tasks and deliver results that are easier to understand. Look for programs with extensive application programming interfaces and various customizable reporting features. Suppose you already have testing tools in place. In that case, that's great, but don't be afraid to branch out and see if there's something that can help you conduct automated security testing more quickly without interrupting your established processes.

For developers to contribute to a secure process, they must first have a firm grasp of the challenges at play. They must have expert knowledge of cybersecurity challenges and the best techniques for fast programming. A developer's knowledge of security flaws and how to prevent them is essential, as is an understanding of why certain coding practices can leave a system vulnerable to attack.

It is not enough for the information security team or other internal workers to be responsible for security training. Remember that they have other things to worry about and a job that has to be done. Rely on third-party security consultants or a comprehensive training program to help ensure that developers are receiving practical, ongoing instruction in safe programming techniques.

The foundational skills should be trained initially. SQL injection and cross-site scripting are the most recurring examples of insecure programming. Prioritizing the most frequent problems can pay off quickly by reducing the frequency with which developers' repeatable errors are introduced into new code and can free up resources for use in more complex areas.

Issues like supply chain attacks can be mitigated by taking precautions against any potential security holes in the technological stack. Even if a malicious entity gains access to a user account, a database, or a local IP address, it should be unable to access the rest of the network. DevSecOps also relies on zero trust to protect development, test, and production environments from both external and internal threats.

An organization's security strategy should be built on zero trust. Traditional network perimeters, in which entities within the project were automatically trusted, are insufficient for modern IT systems, as the zero trust concept acknowledges. The idea of least privilege is upheld by zero-trust technologies, enabling autonomous network segmentation to stop lateral movement and verify all internal connections before trusting them.

By using zero trust automation, access privileges for users and services can be adjusted on the go. Allows authorized users the necessary access to perform their duties while promptly blocking any attempts by hackers or other threats.

Why Should You Use DevSecOps?

The safety of their data is of paramount importance to businesses nowadays. Fortunately, DevSecOp is proven to be a more secure approach to development while still keeping up with today's quick release cycle.

There are tangible advantages to adopting a DevSecOps methodology:

An early stage in the development lifecycle is when DevSecOps' proactive approach to mitigating cybersecurity vulnerabilities is embedded. Because of this, teams working on software will increasingly rely on automated security technologies to conduct security audits on the fly during development rather than slowing down the process.

DevOps teams will perform code reviews, audits, tests, scans, and debugging at multiple points throughout development to ensure the application is secure. Application security and development teams will collaborate to fix vulnerabilities in the code when they are discovered.

DevSecOps is a cross-team, collaborative methodology that brings together developers and application security specialists early in the software creation process. DevSecOps enables teams to get on the same page before, leading to cross-team buy-in and more efficient team collaboration, as opposed to segregated, separate operations that inhibit innovation and can even lead to split across business divisions.

Security strategies that encourage quick development cycles include; embedding security earlier and more frequently in the development lifecycle, automating as many security operations as possible, and streamlining reporting.

Imagine that a team completes all of the early stages of development for an application, only to discover, just before releasing the application into production, that it has numerous security flaws. In such a circumstance, this can cause a significant delivery delay.

Automate the process of finding, monitoring, and fixing the most typical security flaws (CVE). Scanning all prebuilt container images in the build pipeline for CVEs should begin as soon as possible. Security measures should be implemented that reduce exposure to danger and help teams better understand it, so fixes can be implemented rapidly if vulnerabilities are found.

In addition to its other advantages, DevSecOps facilitates an agile development process, which, when implemented effectively, significantly reduces security risks. The automated services used by an application development or operations team can be easily integrated with many of the cybersecurity testing procedures, tasks, and services.

Organizations can eliminate unexpected variables that will unavoidably affect product delivery deadlines by placing emphasis on security early in the development process. What are your thoughts on DevSecOps in comparison to DevOps? Are you incorporating either in your work? Let us know in the comments.