Correlation is not causation 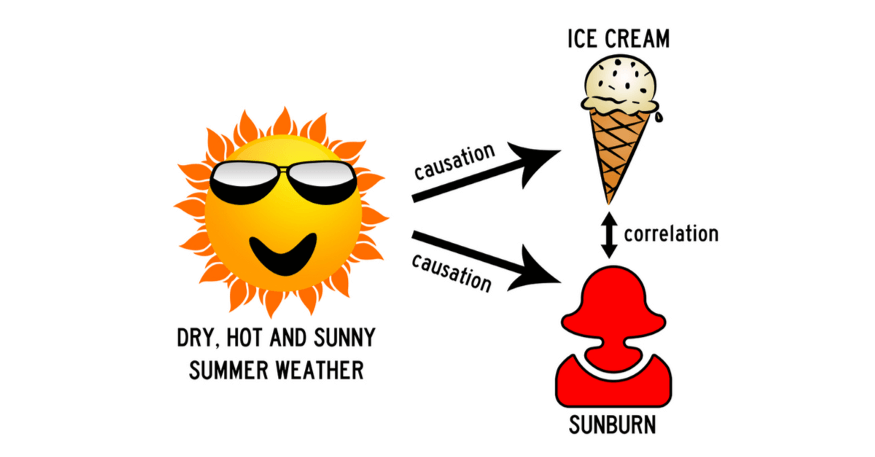 In correlated data, a pair of variables are related in that one thing is likely to change when the other does. This relationship might lead us to assume that a change to one thing causes the change in the other. This article clarifies that kind of faulty thinking by explaining correlation, causation, and the bias that often lumps the two together.

The human brain simplifies incoming information, so we can make sense of it. Our brains often do that by making assumptions about things based on slight relationships, or bias. But that thinking process isn’t foolproof. An example is when we mistake correlation for causation. Bias can make us conclude that one thing must cause another if both change in the same way at the same time. This article clears up the misconception that correlation equals causation by exploring both of those subjects and the human brain’s tendency toward bias.

About correlation and causation

Correlation is a relationship or connection between two variables where whenever one changes, the other is likely to also change. But a change in one variable doesn’t cause the other to change. That’s a correlation, but it’s not causation. Your growth from a child to an adult is an example. When your height increased, your mass increased too. Getting taller didn’t make you also get wider. Instead, maturing to adulthood caused both variables to increase — that’s causation.

Let’s say that we want to offer a promotion or discount to some of our customers. Our marketing department wants to maximize the delta, in other words, the increase in sales as a result of the promotion. So we need to decide which customers will give us the best return on our investment in the promotion or discount. Do we want to offer it only to our top 10% of your clients? Or the bottom 10%?

You might assume that the users who drive more sales are the ones more responsible for your business success. However, this assumption could be wrong. The best choice of which customers to offer the promotion to might be totally different. In the absence of valid experimentation or analytics, you don’t have accurate answers to those questions.

There are many forms of cognitive bias or irrational thinking patterns that often lead to faulty conclusions and economic decisions. These types of cognitive bias are some reasons why people assume false causations in business and marketing:

To know that something is valuable takes experimentation. Experimentation helps you understand if you’re making the right choices. But it has a cost. If you hold a workgroup back by not giving them a feature that brings in value, you’ll lose money. But you’ll learn the importance of that feature.

The value of an experiment lies in the accomplishment of these two things:

A scientifically valid experiment needs to have three types of variables: controlled, independent, and dependent:

Uncontrolled variables add the influence of unrelated factors to an experiment’s results. Correlations might be assumed, and an hypothesis might be formed where none exist. Accurate analysis becomes difficult or impossible. Examples of conclusions draw from uncontrolled variables are shown in the children’s music lessons and mobile phone cancer examples that follow.

How our brain tricks us

It’s easy to watch correlated data change in tandem and assume that one thing causes the other. That’s because our brains are wired for cause-relation cognitive bias. We need to make sense of large amounts of incoming data, so our brain simplifies it. This process is called heuristics, and it’s often useful and accurate. But not always. An example of where heuristics goes wrong is whenever you believe that correlation implies causation.

It is a mathematical relationship in which two or more events or variables are associated but not causally related, due to either coincidence or the presence of a certain third, unseen factor

The point of this example is that researchers can’t assume from only this much data that music lessons affect brain development. Yes, there’s clearly a correlation, but there’s no actual evidence of causation. We need more data to get a true causal explanation.

If you study a chart that shows both the number of cancer cases and the number of mobile phones, you’ll notice that both numbers went up in the last 20 years. If your brain processes this information with cause-relation cognitive bias, you might decide that mobile phones cause cancer. But that’s ridiculous. There’s no proof other than both datapoints happening to increase. A lot of other things have also increased in the past 20 years, and they can’t all-cause cancer or be caused by mobile phone use.

To find causation, we need explainability. In the era of artificial intelligence and big data analysis, this topic becomes increasingly more important. AIs make data-based recommendations. Sometimes, humans can’t see any reason for those recommendations except that an AI made them. In other words, they lack explainability.

The FDA won’t approve cancer treatments that lack explainability. Think about this situation for a minute. Do you want the best possible treatment for your cancer, based on an AI’s analysis of your genomes, your cancer DNA, millions of other cases, and more data, even if you can’t explain how the computer’s neural network came up with that exact treatment? Or would you rather have a suboptimal treatment that you can explain the reasoning for?

Medical explainability will be probably one of the biggest topics of this century.

One way versus two way

Correlations go both ways. We can say that mobile phone usage correlates to increased cancer risk and that cancer cases correlate to the number of mobile phones. Basically, you can swap the correlation. In causation relationships, we can say that a new marketing campaign caused an increase in sales. But saying that the increase in sales (after the campaign ran) caused the marketing campaign doesn’t make any sense.

Any causal statement, by definition, is one way. That’s a big clue about whether you’re dealing with correlation or causation.

In “The causal effect of education on earnings,” David Card says that better education is correlated to higher earnings. But the most important thing he says is that if we can’t do an experiment, with all our variables constant, we can’t infer causation from a correlation. We can always bring explainability to the table. But in real life and with big enough problems, causations based on explainability are hard to prove. From a scientific viewpoint, they can’t be called anything more than a theory.

In the absence of experimental evidence, it is very difficult to know whether the higher earnings observed better-educated workers are caused by their higher education, or whether individuals with greater earning capacity have chosen to acquire more schooling.

— David Card, The causal effect of education in earnings

Good predictions are based on correlations

It sounds like a contradiction, given the context of this article. Correlation is about analyzing static historical datasets and considering the correlations that might exist between observations and outcomes. However, predictions don’t change a system. That’s decision making. To make software development decisions, we need to understand the difference it would make in how a system evolves if you take an action or don’t take action. Decision making requires a casual understanding of the impact of an action.

We don’t make better predictions by developing a better casual understanding. Instead, we need to know the precise limits of the techniques we use to make predictions and what each method can do for us.

cognitive-bias
correlation
Back to Blog