The fundamentals of Iris Recognition 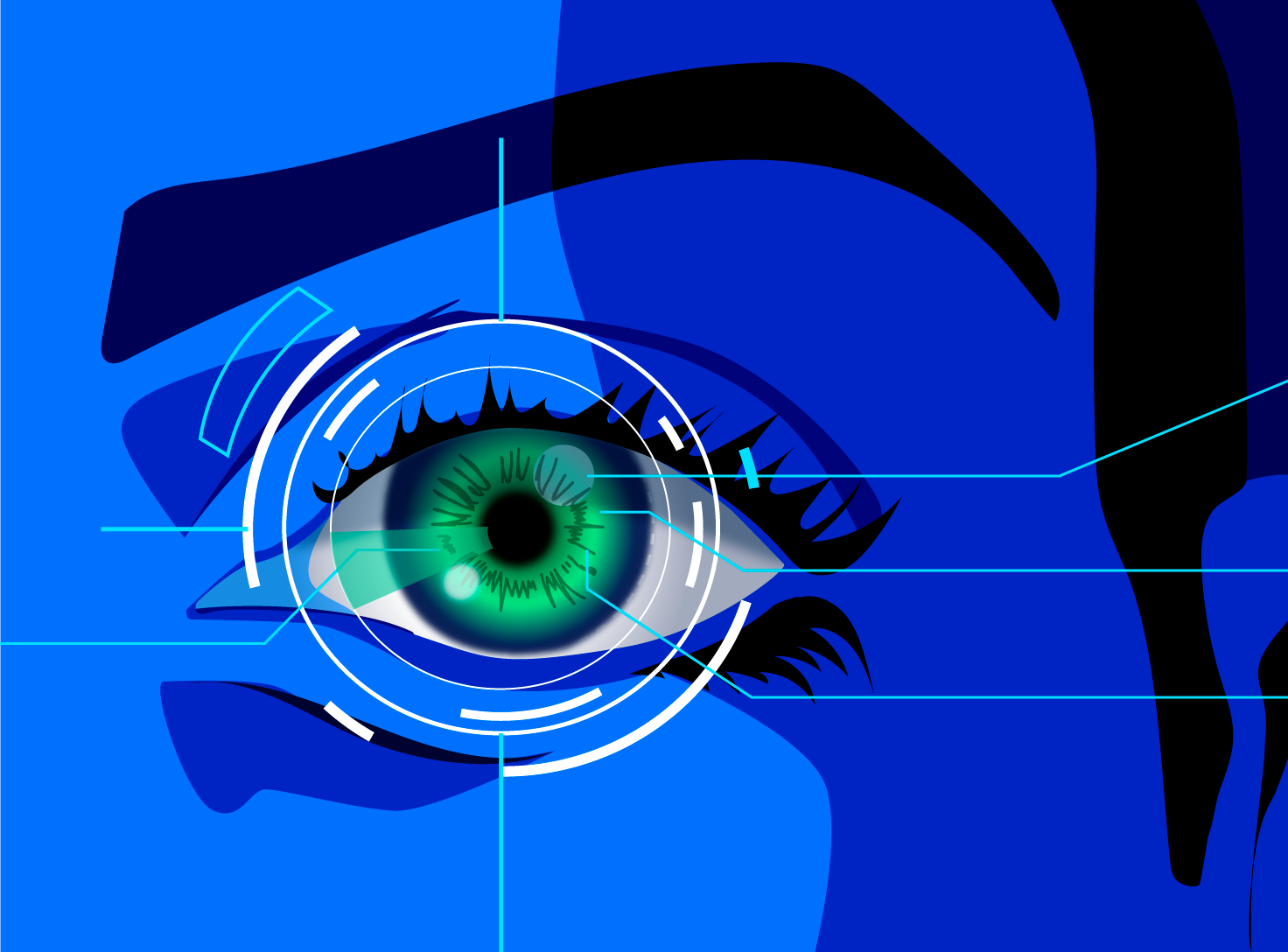 Many businesses are adopting a zero-trust framework to ensure all users in an organization are authenticated for security purposes. Iris recognition (IR) is one of the strongest, most secure, and reliable biometrics used today.

For context, biometrics is where an individual’s unique physical or behavioral traits are used to confirm their identity. Biometrics have a much higher accuracy and security standard than simply using a password.

Fingerprints, facial features, and retinal recognition are all other forms of biometrics used throughout the security and tech industries. Still, few of these other biometrics have the advantage of being as secure and easy to use as iris recognition.

This article will provide more detail about the Iris, break down the technology of how IR works, and give you an example of one of the best-known use cases of Iris recognition.

The anatomy of the Iris

Before getting into iris recognition, we should first examine precisely where and what the Iris is, as there is often confusion between the Iris, the pupil, and the retina.

The Iris is the colored region that lies in between the pupil and the eye's sclera.

In the image below, we see that the Iris is shown in brown while the pupil sits in the middle of the iris. The Sclera is the white part of the eye surrounding the iris and the entirety of the eye.

Functionally, the Iris governs how much light enters through the Pupil by either expanding or contracting.

More specifically, it is two muscular regions in the Iris that is primarily responsible for this, which are:

The structure of the Iris hardly changes over the lifetime of an induvial. Compared to the other physiological traits of human anatomy, the Iris probably possesses one of the richest sets of unique features, which can be used to confirm an individual's identity throughout their lifetime.

The unique features of the Iris include the ridges, folds, freckles, furrows, arches, crypts, and corona. Also, the collarette of the iris is the thickest region (and also possesses many unique features), which gives the iris its two distinct regions, known as the:

Studies have even proven that twins have different sets of Irises. Due to the uniqueness of the Iris, it is one of the best forms of biometrics available and why Iris recognition is still used to this day.

What is Iris recognition?

Iris recognition is the multistep process of imaging the unique features of an Iris to create a digital map of those features, whereby it can be translated into code that is later compared to a database of other Irises.

Through the comparison phase, if a positive match is found, then the identity of the user is confirmed. If the comparison comes back negative, you might have a spy in your mist.

Overall, Iris recognition is known to be one of the best forms of biometrics to use for high-security use cases due to its efficiency, accuracy, and complexity.

We've highlighted all the various features and anatomical parts of the Iris. These unique features make the Iris such a distinctive form of biometric.

How does Iris recognition work?

The idea of using the iris to confirm an individual's identity began in the 1930s when the University of Cambridge developed the first mathematical algorithms for iris recognition.

There are three main steps to completing an iris recognition system successfully:

Let's look at each to understand how iris recognition works.

Traditional iris recognition technology requires the end-user to stand no more than ten inches away from the camera, although it can help to be up to three feet away with some more advanced tech.

For the imaging process, a Near Infrared (NIR) light is shined into the iris. Various grayscale images are then captured and compiled into one primary composite photograph.

Special software then removes any obstructions from the iris, including portions of the pupil, eyelashes, eyelids, and any resulting glare from the iris camera.

From this composite image, the unique features of the iris are then “zoned off” into hundreds of vectors taking precise measurements of the Iris features. Then using Gabor Wavelet mathematics, which is a form of analysis, can extract more measurements and amplitude levels from the image.

These measurements of the Iris are subsequently converted into a binary mathematical file, which is generally less than 500 bytes. Due to the small template size of this file, verification of an individual can occur in less than a second.

This small file then becomes the actual iris biometric template also known as the “IrisCode”. However, to positively verify or identify an individual from the database, the IrisCode must be first compared and cross-referenced with one another.

The IrisCodes are compared byte by byte, looking for any dissimilarities amongst the string of binary digits to accomplish the comparison stage.

In other words, the program is looking at what percentage of the zeroes in the IrisCode match up. The answer is found by using a technique known as “Hamming Distances” to compare two long strings of binary code.

After these distances are measured, statistical independence tests are then carried out, using high-level Boolean mathematics (such as Exclusive OR Operators [XOR] and Masked Operators).

One of the most famous examples of Iris recognition was used to confirm Sharbat Gula's identity, also known as the “Afghan Girl” from the infamous 1985 National Geographic Magazine cover by Steve McCurry. After the picture was published, it became world-famous, appearing in books, magazines, newspapers posters globally.

However, when the original photo was taken, McCurry exchanged zero contact information with the girl, so tracking her down years later became a monumental task.

McCurry and his team chased numerous leads throughout Afghanistan and Pakistan but had no luck finding Gula. Finally, the breakthrough came when a man claimed that Gula was an old next-door neighbor. After introducing Gulas's brother, who had similar colored eyes, McCurry knew he was onto something.

Fortunately, after some negotiation to overcome cultural barriers, McCurry met and photographed Sharbat Gula once more.

However, since it had been seventeen years since the original photo was taken various tests had to be conducted to verify Gula’s identity. To make sure that Gula was truly the Afghan girl, two sophisticated tests were utilized:

In both tests, the photos taken in 1985 were compared with those taken in 2002. The facial recognition techniques came back positive. However, the ultimate test came down to the iris recognition biometrics for true validation.

The photos of Gula were first scanned digitally to be used within the Iris recognition system. A major obstacle was that Iris recognition works only by taking scans from live subjects and not static photographs.

After making a series of adjustments to the Iris Recognition software, the scientists concluded that Sharbat Gula was positively the “Afghan Girl”.

Below are the pictures from 1985 and 2002 compared side by side, taken seventeen years apart.

"The Afghan Girl" - this image is courtesy of the NYTimes

Iris recognition biometrics into the future

As highlighted, the Iris is full of unique features and anatomy that make it a great biometric for a richness of data. By outlining Iris's physical structure, understanding what IR is, and then the process of how IR works, you should have greater foundational knowledge to explore IR further.

Iris recognition technology has advanced in the last few years and has become a tool of choice for authentication purposes due to its efficiency and accuracy.

Although today, facial recognition and fingerprint readers are the most popular forms of biometrics. Iris recognition is still incredibly relevant when security is a top priority. The technology for IR may continue to develop and become more widely used for more security-driven purposes.

If you are still curious to learn more about Iris recognition, I recommend checking out the latest edition of the Handbook of Iris Recognition by Bowyer and Burge. I referenced it here in the article as it's an extremely comprehensive guide to Iris recognition technology.