The Case of the Century: iOS vs. Android Development 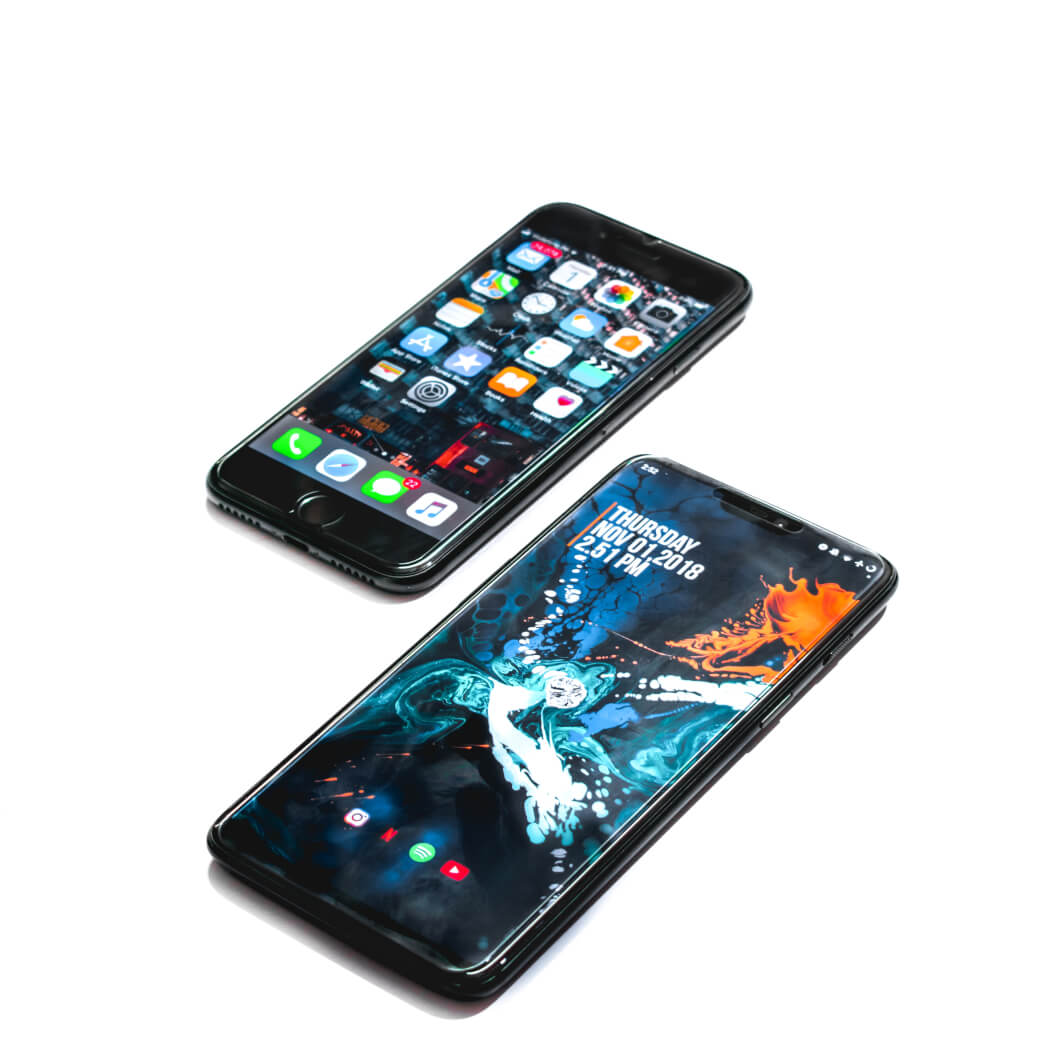 Decision making is an art as old as time itself. Every single day, 7.44 billion human beings are faced with choices to make. From questions so small as whether to turn left or right to reach a destination to selections as colossal as choosing a lifetime partner, or picking the right career path. The possibilities are endless, and the courses of action we take inadvertently shape our successes and failures.

The same is true of mobile app development. Standing on the verge of a move that will impact your business in more ways than one, a daunting crossroads appears. To iOS or to Android? If you’re reading this, there’s a pretty sky-high probability that you stand at that very fork in the metaphorical road yourself. Many have been faced with such a weighty decision in the past, and many more will do so in the future. It’s an inevitable period of much contemplation and research.

Luckily for you, we’re A-class experts here at Rootstrap, and we know how rapidly businesses grow. Often times, this means the luxury of dawdling as you prepare to make the best choice for your product isn’t a reality for most.

So we did it for you. Behold, our seven-step process to help you pick the best platform to build for. Onwards and upwards, friends!

Choosing Between iOS vs Android Development

That said, many early-stage founders are strapped for cash, and with the high price of mobile app development, it may not be possible to build two versions of your app from the very beginning. If this is your situation, you may have to choose between iOS and Android mobile app development – at least for the time being.

After working with brands like Microsoft, Spotify, Epson, Kia, and Village Roadshow Pictures (you can check out the rest of our list of partners here!), we’ve perfected the mobile app development process from ideation to completion.

We’ll break down this decision of Android vs. iOS development differences for you. Starting with…

Analyzing the Advantages of iOS Development

Let’s imagine for a minute that we’re back at that metaphysical crossroads. This time, you’re also playing the role of Sherlock Holmes, pondering the case of Android vs. iOS app development. Any good detective knows that the key to unlocking the solution to a puzzle is through comparative analysis. If we were to view Android development vs. iOS development as a mystery, where would we rationally begin?

A pros and cons list, naturally. Kicking things off with the positives - the brilliance of iOS development:

1) It reaches a younger, Western demographic with higher incomes and engagement scores

Who’s your audience? If you’re aiming to target younger users who live in North America or Western Europe, iOS development is for you. Yes, iOS users only lay claim to a small portion of the market, but they also boast higher incomes and averages of 4x higher rates of engagement than Android users. Worth keeping in mind as you want your app to reach your target audience for optimal success.

We shall not tell a lie. Business Insider revealed just this summer that “Apple users spend twice as much on apps as Android users.” From a monetization perspective, that’s important. Especially considering Android devices owned the market in 2017, accounting for more than 85% of global smartphone sales. It all ties back to that point before, however. Android is more of a popular global beacon, while Apple appeals to a much more limited but more affluent demographic.

Analyzing the Disadvantages of iOS Development

Now let’s dive into the disadvantages of iOS development:

1) A much slower release process

It’s a well-known fact that iOS release cycles just go a lot slower. It takes weeks for the iOS release cycle vs. the mere days it takes the Android release and approval process to go through. This means publishing updates and changes takes significantly longer on iOS than on Android.

2) It’s not a global-facing platform

Yep. When it comes to reaching users in Asia, Africa or Latin America - really just beyond the traditional Western target market - iOS is not the best. Remember, Android owns more than 85% of worldwide smartphone sales. So, consider your audience and who you’re trying to reach.

Here’s a fun tidbit of insider knowledge – there’s a core element of iOS development that is a lot more expensive: user acquisition. It's proven to cost way less to acquire new customers on Android than it is on the iOS platform. Always worth keeping in mind.

Analyzing the Advantages of Android Development

Detective hat still on? Good, because you’ll need it. Onto our next delightful mystery - the complexities of Android development. Let’s get cracking with the good stuff:

1) You can publish updates almost instantly

Anyone who’s ever developed an app before knows just how much time, and energy goes into updates as you are working out of the inevitable kinks of v1.0. With Android, you can publish updates that same day. With the App Store, it can take anywhere up to a week or longer.

2) User testing is cheaper and quicker

Back to our two favorite words: fast and cheap. What developer or entrepreneur doesn’t love hearing that their user testing stage can be knocked down in length and in price? Android offers this naturally because of the aforementioned point: launching can be a lot quicker on Android.

Another great draw here is how much less it hurts your wallet when acquiring users to your new mobile app. Draw ‘em in, and then, once you’re happy with the way v1.0 on Android is going, consider launching on iOS after.

Analyzing the Disadvantages of Android Development

Let’s go a bit more into detail with the drawbacks of Android development before making that final call, though:

1) It’s not fantastic for Western markets

Reiterating this point with a bit more numbers to draw in for argument’s sake. iOS users tend to be younger, live in North America and Western Europe, have more money, and spend way more time on the apps that they buy. They also lean towards more purchases in the education and lifestyle app niches. So say your app is a meditation app that relies on frequent check in’s and in-app purchases to ensure a quality user experience. But you’re launching on Android. This could really hurt the success of your app from the get-go, as Android users based across the world tend to have less money and spend less time on their apps themselves.

Oh, money. It’s at the heart of everything we do, isn’t it? A sad but relatively honest truth, especially when it comes to the competitive industry of apps. Mobile analytics blog Flurry revealed earlier this year that monetization on Android apps underperformed in comparison to iOS by 80%. That’s a heck of a lot of revenue that one platform owns over the other. Still, it always depends on who, what, and where your target audience is.

3) Timing is ultimately up in the air

While it isn’t arguable that release on Android is eons faster than on iOS, the development cycle itself has a tendency to take a little longer on Android vs. the Apple platform. What it boils down to is that the timing of how long it takes to build has much more to do with what level of UX and feature complexity you need for v1.0 of your product. Even if it’s fairly simplified, Android will probably take more time to make.

Now let’s take a look at the development process itself. Android and iOS use different coding languages, and that means development works differently for iOS vs. Android. So is it easier to develop an iOS app or an Android app? To understand this, let’s explore a few key points.

●  Developing an app for Android means more flexibility for features

While we don’t deny that the timing of development is a battle that iOS typically wins, there’s always that release and testing stage delay in the Apple-sphere that Android is free of. But what about ease of build?

●  iOS is easier to build on

That’s right - when it comes to ease of build, iOS takes home the gold. Going back to Android’s open source software, iOS is free of that, as the system is standardized. Roughly, this means that you’re developing for a few operating systems and that, by developing on iOS, you’re avoiding software fragmentation.

Finally, our last, but certainly not least, a concluding point we ask you to consider:

●  Your app could be rejected on iOS

Thanks to all that standardization we just mentioned, it’s imperative to recognize how stringent the iOS development space is. The rules are strict, as are the expectations. We’ve already mentioned the elongated review process. It’s no breeze to waltz your way through to the Apple Store. If it's not up to Apple’s standards, you better believe your app is likely to get shut down before launch.

Our Final Call: iOS vs. Android

So what’s the solution?

Android is the easier route to take to start with when it comes to building v1.0 apps. But the answer doesn’t stop there. Why not develop on both, if you have the right audience and budget for it? The solution to this is pretty straightforward, we’d say. First Android, then iOS.

Our company belief is that it is better to launch on Android first, then launch iOS. What it comes down to is that user acquisition is cheaper on Android, and you can publish updates within a few hours. Comparatively speaking, the Apple App Store has a standard waiting period of at least several days. By launching v1.0 on Android first, you can accomplish user testing on the platform both quickly and cheaply (everyone’s two favorite words). From there, once all the kinks from v1.0 are ironed out, then you can make the same tweaks to your iPhone app and launch on iOS.

Rootstrap Can Help with That

At Rootstrap, we’re well experienced with both Android and iOS mobile app development, and with more than 500 product launches under our belt, we know the ins and outs of the process We love to work with all types of brands and businesses, from family-run shops to enterprise pioneers. Getting ready to develop an app yourself? Drop us a line and let us know what you need help with.

app-development
ios
Android
Back to Blog