The data presented in the following eCommerce report was based on a representative sample of the eCommerce industry, estimated to be worth $586.92bn in 2019. The sample is weighted towards small online retail companies for comparative purposes with Amazon, with the majority of respondents in the $1-10M revenue range.

The purpose of the report is to measure the impact of Covid-19 on the eCommerce and Online Retail industry, with the hypothesis that as Covid-19 continued the pre-existing disruption of brick-and-mortar retail, the eCommerce industry would see an increase in growth. Furthermore, this increase would not be evenly distributed as incumbents like Amazon would gain the majority of the revenue courtesy of increased eCommerce adoption at the expense of smaller eCommerce retailers.

The data collected showed the largest average increase for eCommerce occurring in Q2, with small eCommerce companies growing 140.2% compared to Amazon's growth of 40%. In spite of this discrepancy in growth rate, the eCommerce industry has seen consolidation that has rewarded the larger players at the expense of smaller eCommerce companies. Amazon broke through the 50% eCommerce market share barrier in Q4 of 2020, earning $38.12B in additional revenue in that quarter alone. The average small eCommerce company, meanwhile, only accrued an additional $50,000-$480,000 in revenue courtesy of a once-in-a-lifetime pandemic in Q4. 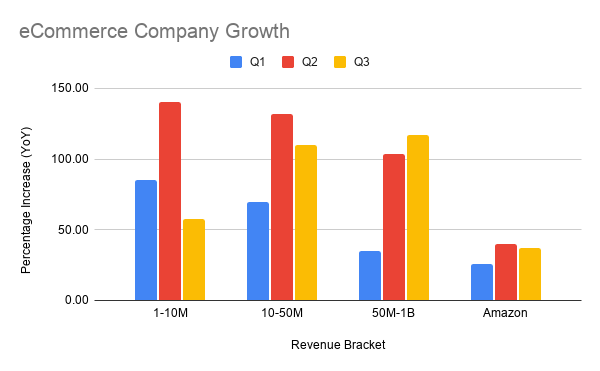 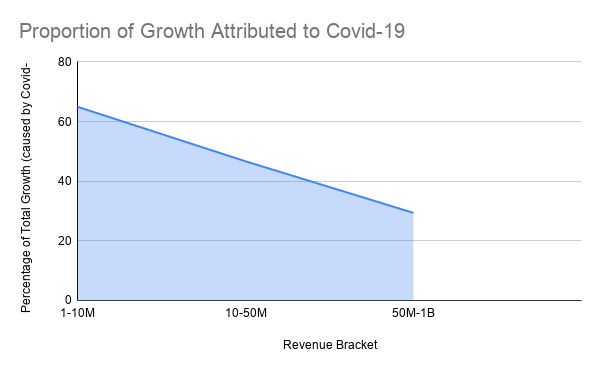 Qualitatively, survey respondents from the small eCommerce company category of 1-10M attributed the majority of their growth to Covid-19 of 64.98%. This leads to an interesting observation that the larger the company size, the less likely it is to attribute the growth gains to Covid-19 and more to successful planning and business practices, in spite of the largest benefits accruing to larger eCommerce companies. Respondents in the enterprise eCommerce category (in excess of 1B in revenue which includes Amazon) declined to attribute a proportion of their growth to Covid-19.

While the growth rates seem to suggest that eCommerce is being a disruptive force, they don't tell the whole story. The chart to the right shows how Amazon, while suffering a minor loss of market share at the height of the pandemic in Q2, has further consolidated their domination of the eCommerce market with a market share in Q4 of 58.96%, exceeding Q1's market share of 51.49.

The following table demonstrates this more concretely, providing the incremental increase in revenue an average company in each revenue bracket was expected to accrue in 2020.

The trend towards consolidation is evident, even though Amazon's growth rate was smaller than the other revenue brackets, it accrued the most gains in terms of absolute revenue. Small eCommerce companies in the 1-10M and 10-50M ranges saw a decline in additional revenue earned in Q3 and is projected to earn even lower in Q4. 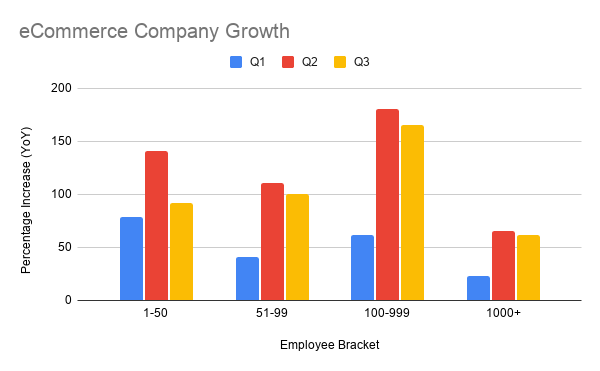 eCommerce companies were organized according to reported employee count for 2019. Consistent with findings based on revenue bracket, Q2 saw an acceleration of growth fueled by Covid-19. The 100-999 employee bracket saw the largest growth with 180.2% in Q2 and a minimal drop-off in Q3 to a growth rate of 165.8% YoY. The 1000+ category (including Amazon) once again accrued the most in absolute revenue gains but had the lowest proportional growth rates. 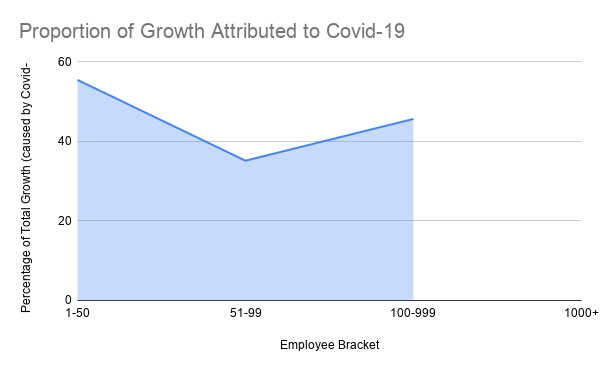 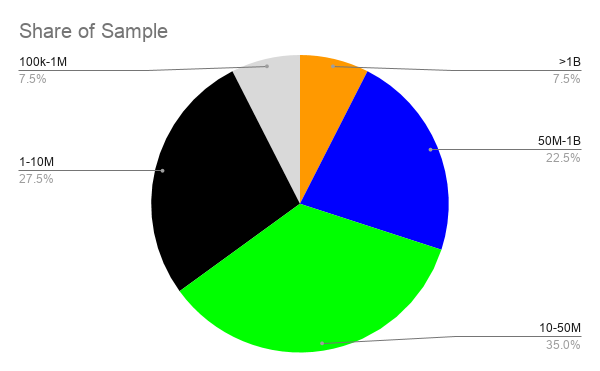 eCommerce Companies were divided into revenue segments based on 2019 data. The majority of the respondents were classified as small with a revenue range of 1-10M and 10-50M with 27.5% and 35% respectively. Mid-size eCommerce companies comprised of 22.5% of the sample with revenue in the range of 50M-1B. These segments were the primary focus for the purposes of comparison to Amazon's performance. 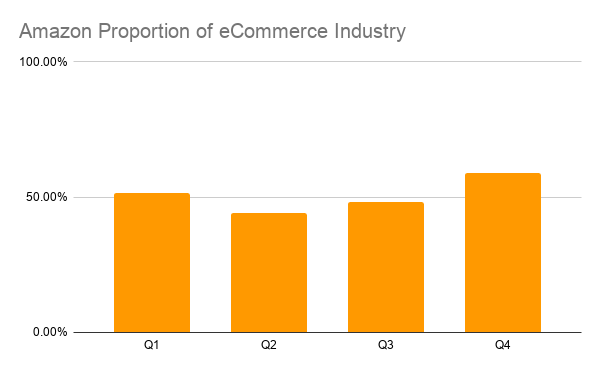 How much has the eCommerce industry grown in 2020?

Revenue growth for eCommerce was up by 44.4% in Q2 of 2020 YoY, substantially higher than the 14.6% gain in Q1 as the US lockdown period took hold, according to US census data. In Q3 the growth slightly slowed but was still rapid with a 37.1% increase YoY as eCommerce continued to reap the rewards of consumers at home shifting purchasing habits to online in favor of brick-and-mortar retail consumption.

How has Covid-19 impacted the eCommerce industry?

The eCommerce industry was one of the big “winners” from the Covid-19 epidemic, courtesy of brick-and-mortar retail suffering closures and consumers preferring online purchases for convenience and safety. The industry as a whole has grown substantially but is seeing consolidation at the top. Namely, Amazon has pushed past 50% market domination at the end of 2020, while the growth spike resulting from Covid-19 has tapered off for small eCommerce companies.

How has Covid-19 impacted Amazon vs the rest of the eCommerce industry?

In spite of higher growth rates for small eCommerce companies during the initial Covid-19 lockdown period of Q2 in 2020, the eCommerce industry has seen increasing consolidation at the enterprise level, most notably Amazon. While Amazon's share of the industry slipped from 51.49% in Q1 to 44.31% in Q2, reflecting increased competition and disruption by smaller eCommerce players, Amazon has further entrenched their advantage with an eCommerce market share of 58.96% in Q4.

Statistics were collected via surveys conducted with eCommerce & Online Retail Companies based on a Representative sample of the eCommerce Industry, estimated to be worth $586.92bn in 2019. Additional third-party data sources used include Amazon's earnings reports and Census Bureau industry data.

Statistical data collected were as follows:

Charts were derived by dividing into relevant segments based on eCommerce company Revenue Size and Employee Count.

Revenue Size was divided into 5 categories:

Employee Count was divided into 4 categories:

Thanks to the following eCommerce companies for sharing their insights about how Covid-19 has impacted their business and the eCommerce industry at large.